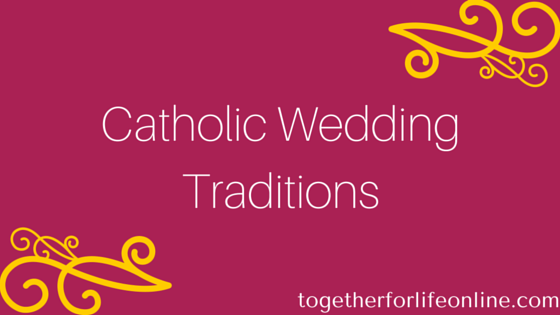 What Ethnic and Cultural Traditions Have a Place at Catholic Weddings?

A child eating with her mother and grandmother asked, “Mom, why do you always cut an inch and a half off the Thanksgiving ham?” The mother replied, “I learned that from your grandmother. It makes the ham juicier. Right, mama?” The grandmother giggled, “I did it because I didn’t have a roasting pan big enough!”

Some say tradition is an excuse to act without thinking. When it comes to rituals, whether religious or secular, we often simply do what we’ve seen and learned from others. But not knowing where our traditions come from can lead us to do some strange things that may not fit our own situation.

The same is true when preparing a wedding. You might be surprised to know that a lot of what you see and hear on TV or in the movies or even at the last Catholic wedding you went to isn’t actually in the official Catholic wedding rite for the United States.

If these aren’t in the Catholic rite, where did they come from, why do some Catholic weddings have them, and how do you know which of these would be appropriate for your wedding?

Some of these traditions come from a time period in societal culture when marriage was treated as a contract between families and the transfer of wealth and property played an important role. “Giving away of the bride” ritualized this contract. In this light, you can see how the tradition of the father escorting his daughter to her groom may have developed.

Catholics, however, believe that the bride and groom give themselves to each other as equal partners, and as one, they give themselves and in a very particular way their marriage to God. That is why the rite directs the bride and groom to walk in together or to be escorted by both their parents. This is a practice you hardly see, but it is the preferred practice according to the Church’s teaching about the Sacrament of Marriage.

Does this mean it would be inappropriate to go with tradition? Not necessarily. Parents play a major role in our lives, and sharing this moment with them is a gift. But there are ways to blend tradition with what the rite asks for. For example, the groom might walk in first with his mother and/or father, followed later by the bride with her father and/or mother. Discussing these options with your family and parish ministers will also give you some valuable time to reflect on the role your family has had in your relationship and maybe even help mend divisions.

Some Catholic wedding traditions are actually trends in popular culture. These include things like the unity candle, a sand ceremony, or improvised vows. These practices developed relatively recently and have been used in both religious and civil ceremonies.

Of these, the unity candle, though not part of the rite, is the most common in Catholic weddings. A unity candle is not required, and in some churches, it is not allowed. [Read more about the tradition of lighting the unity candle.]

Other wedding traditions are rooted in ethnic cultures. These customs hold deep meaning for many families, and the church invites couples to include them in their ceremony if they do not conflict with a Christian understanding of marriage. Therefore, in many Hispanic families, there is a blessing and giving of coins. Filipino families place a veil and cord over the couple. Vietnamese couples honor their ancestors, and Celtic families wear the colors of their clan.

Finally, some of our traditions developed from a spiritual devotion to the Virgin Mary. She is a model for living one’s faith in the good and bad of everyday life. It is natural, then, for Catholics to want to pray to her as they begin their new life together. Some couples place flowers at an image of Mary and spend a few moments in prayer to her during the wedding.

But more often than not, some really just want a special song sung at that time and they may think they need to follow the tradition in order to have that song included. Not so. If both of you genuinely have a devotion to Mary, then certainly ask if you can include this tradition. But if not, don’t feel you are required to do it.

The Importance of Ritual

Rituals take root in our lives most often because they unite us to the past, connect to who we are today, and help us express who we want to become. Good rituals are powerful because they communicate this so clearly.

As you prepare your wedding, start with the traditions that have been handed on to you from all the cultures that make you who you are today. Most importantly, begin with the sacramental rite that has been given to us from our ancestors in faith. Explore where these traditions come from and what they mean. Then adapt them to help you express what the two of you hope for in your life together.

Download the full article “Appendix C: Honoring Ethnic and Cultural Traditions” from Together for Life.

< Back to “Your Catholic Wedding Ceremony”