Who Is the Patron Saint of Marriage? 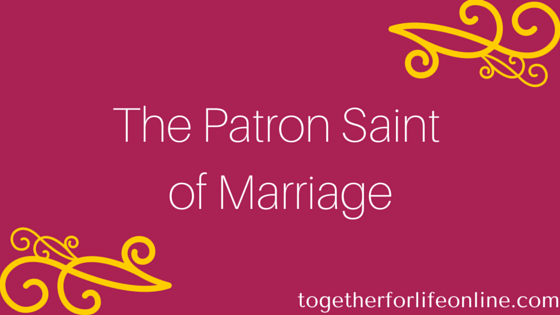 Below you can find a brief biography of each patron saint of marriage along with links to further information and readings about them. 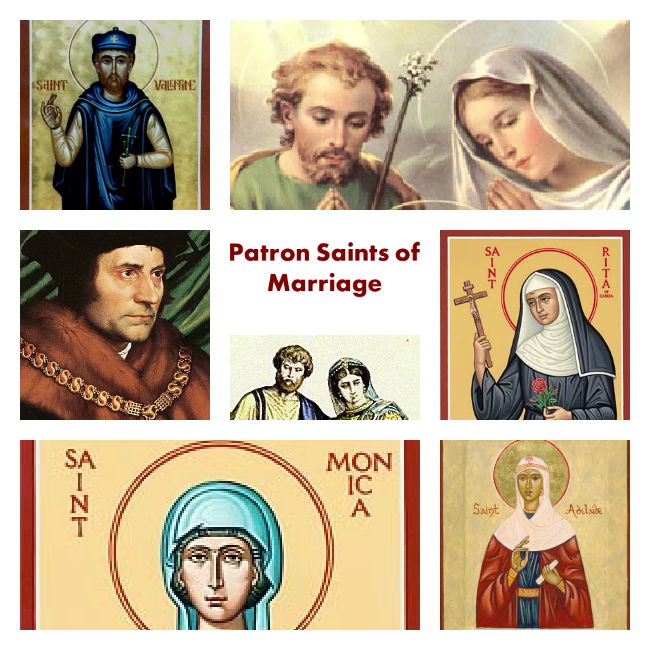 Saint Adelaide of Burgundy (of Italy)

Saint Adelaide, patron saint of second marriages, was a princess who married Otto the Great, the Holy Roman Emperor. Empress Adelaide was very popular with her people and became a much loved queen and one of the most prominent European women in the tenth century. Her first husband, Lothair II, the king of Italy, died of poisoning. Towards the end of her life, this great empress retired to a convent in Alsace, where she spent her remaining days leading a life of prayer.

Read more about St. Adelaide at SQPN and EWTN.

Saint Adelaide, patron saint of second marriages, pray for us!

Saint Gengulphus is the patron saint of difficult marriages. Unwilling to shame his unfaithful wife, he sought a life of solitude in his castle in Avallon. Unfortunately, he was murdered by his wife’s lover.

Saint Gengulphus, patron saint of difficult marriages, pray for us!

So much can be said about St. Joseph. As the husband of the Virgin Mary and father-figure to Jesus, Joseph is clearly an important source of intercession for married people. He had the deepest respect for his wife, the Virgin Mary, and led a life of service to her and young Jesus.

Read more about St. Joseph in the first two chapters of the Gospels of Matthew and Luke or at SQPN and Catholic Online.

Saint Joseph, patron saint of married people, pray for us!

Faithful mother to Saint Augustine of Hippo, Saint Monica is the patron saint of married women and mothers. Despite an ill-tempered husband, a critical mother-in-law, and a stubbornly sinful son, she persisted in an intimate prayer life with God, interceding often on the behalf of others. As a result of her fervent prayer, her husband, mother-in-law, and son Augustine converted to Christianity. Saint Monica’s example of prayer should be a guiding light to all married people, both women and men.

To find out more about St. Monica, visit the Catholic Fire, American Catholic, and SQPN.

Saint Monica, patron saint of married women, pray for us!

Read more about Saint Priscilla and Saint Aquila at Catholic Online and Wikipedia.

Saint Priscilla, patron saint of good marriages, pray for us!

Saint Rita is the patron saint of difficult marriages and impossible causes. In her youth she wanted to enter a convent and become a nun, but her parents arranged for her marriage anyway. She lived out her vocation to marriage and motherhood despite her violent husband. After many difficult years of marriage and many prayers, Rita’s husband repented, but was soon killed by an enemy of his. Later she fulfilled her dream of becoming a nun, joining an Augustinian convent.

Read more about St Rita of Cascia at Catholic Online and American Catholic.

Saint Rita, patron saint of difficult marriages, pray for us!

Saint Thomas More is a famous Catholic saint who stood up to Henry VIII in defense of the Catholic Church’s teachings on marriage. King Henry VIII of England wished to divorce his wife and marry another woman, but he was unable to obtain the Pope’s blessing. St. Thomas More was tried and unjustly convicted of treason for not acknowledging the king as the head of the Church of England. He would later be martyred for his faith and loyalty to the Church. Despite the fact that he is the patron saint of difficult marriages, he enjoyed two happy marriages, one to his beloved wife Jane Colt who died at a young age, and later to a widow named Alice Middleton. It was the difficult marriage of Henry VIII that earned More the patronage of difficult marriages, not his own life as a husband.

For more information about St. Thomas More, who is known for many other accomplishments, check out Catholic Online, Catholic Encyclopedia, and The History Guide.

Known for the popular holiday St. Valentines Day, the real Saint Valentine is the patron saint of happy marriages, betrothed couples, love, lovers, young people, and (fittingly) greeting card manufacturers. Despite the holiday for lovers, Saint Valentine was actually a martyred priest who was beheaded in Rome on February 14th in Rome. Very little is known about Saint Valentine and it is believed that the traditions of Valentines Day developed in England inspired by the work of Geoffrey Chaucer. In 1969, the feast of Saint Valentine was removed from the Roman Catholic Calendar of Saints because so little is known about his life and certainly not enough to connect with the common practices associated with the holiday today.

Read more about the history and legend of Saint Valentine at Wikipedia, SQPN, and Catholic Online.

Saint Valentine, patron saint of happy marriages, pray for us!

P.S. If you are looking for more information about Catholic saints and the family life, take a look at A Book of Saints for Catholic Moms published by Ave Maria Press.

Jared is the online editor of Together for Life Online. He is the Content Marketing Manager at Ave Maria Press where he oversees publishing efforts in eBooks, eTextbooks, websites, and other digital media. He is happily married with three children and passionate about religious education, blogging, prayer, and his family. Contact him for questions about this website or to submit a guest post.

Get monthly emails with inspirational marriage advice and enrichment ideas.