By Together for Life Online TeamJuly 26, 2013Catholic Weddings, Meaning of Marriage

Fully grasping the Church’s teaching about marriage is complicated business. Understanding Catholic annulments can be even more so. Add to this rich, but complex teaching, the pain of divorce and often continuing timidity about entering a second marriage and many Catholics simply opt out of Church weddings the second time around.

Here we offer sixteen frequently asked questions about Catholic annulments and brief responses by pastor and canon law expert Fr. Kevin E. McKenna  to help take away some of the mystery. 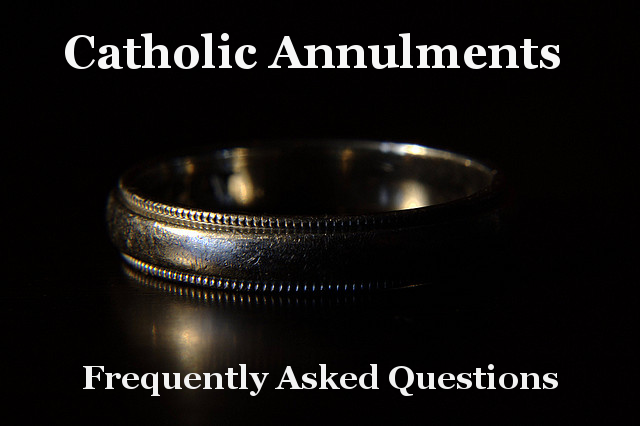 1. What is an annulment?

An annulment, formally called “a declaration of nullity,” is an official declaration by the Roman Catholic Church that a marriage did not meet the requirements for validity. Validity means that the desired outcome (in this case, marriage) has actually taken place as recognized by the Church.

Although to all outward appearances, a wedding was properly celebrated (the vows were recited before the priest in a Catholic church, etc.), there is much more needed for the wedding to be understood as a sacred union. For instance, the internal dispositions of the parties and a proper understanding of what marriage is all about are also requirements for a valid marriage.

This determination is based on a thorough examination of the marriage in question by the local diocesan tribunal. The tribunal–the formal name for a church court–looks at information submitted by one or both of the former spouses to see if all the requirements for a valid marriage were present in their union.

2. Annulment vs. Divorce: What is the difference between a Church annulment and a divorce?

A civil divorce is the dissolving of the marriage relationship by the State in which the parties live. The Church holds that marriage is a sacramental union of a man and woman that can be dissolved only by the death of one of the spouses. In the annulment procedure the Church examines whether the union did in fact reach its fullness and become all that the Church believes a marriage to be.

3. When is an annulment needed?

In order for a Roman Catholic to re-marry it is necessary that a previous marriage be determined defective in some manner (declared null). The Church believes that “marriage enjoys the favor of the law” and is therefore presumed to be valid, unless the contrary is proven.

In short, if a Catholic who has been married and divorced wants to enter into a valid Church marriage, an annulment is needed.

4. What is required to get an annulment?

Although the basic annulment requirements are standardized, the exact procedures for the obtaining of a declaration of nullity can vary from diocese to diocese. Ordinarily, a form must be completed and some documentation is required, including recently issued baptismal certificate, a copy of the civil divorce papers, and the Catholic marriage certificate.

5. Are annulments granted very often? How long does it take?

6. What are some of the reasons why an annulment might be granted?

Part of the process for preparing the case for the tribunal will be establishing the “grounds” on which the tribunal will examine the case in question. In order for a marriage to be valid in the eyes of the Church, there must be at least:

7. How much will it cost to obtain an annulment? Why is there a fee?

Although many tribunals are subsidized by the diocese in which they operate, such subsidies rarely cover the total costs of the tribunal office which normally supports several court officials and resource staff, as well as office supplies, etc. A Catholic annulment cannot be refused or delayed on the basis of the inability to pay the tribunal.

8. Can I apply for an annulment even if I don’t have enough money to pay for it?

Most tribunals make some type of financial arrangements with those who cannot cover the costs of the expenses, allowing an extended time for the payment of fees or even the waiver of fees under certain circumstances. Check your own tribunal for payment policies.

9. What will I be asked to do in the Catholic application process?

There exists some limited variation in the materials that are needed to apply for an annulment. The process normally begins in a parish with a priest or other pastoral minister and the completing of a form that will summarize basic information about the applicant and the former spouse. Some questionnaires attempt to clarify possible grounds that might be pursued in the annulment. Some tribunals request a type of self-inventory or history to be written by the petitioner, which touches on issues related to early background of the applicant, courtship, marriage, and married life.

10. Does my former spouse have to cooperate?

Every effort must be made to obtain the contact information of the former spouse (“respondent”). It is important that the respondent be given the opportunity to share perspectives on the former union. The unwillingness of the respondent to testify to the tribunal does not prohibit the case from moving forward.

11. Do my family and friends need to be involved?

The petitioner will be asked to provide the names of several witnesses who knew at least one of the parties (preferably both) and preferably during the early stages of the union who can provide the court with some insights and observations concerning the marital union. Most often these individuals are asked to submit a written statement, the length of which is usually determined by how well acquainted they are with the marriage and the relationship of the spouses prior to the marriage.

12. Are there documents I have to submit with the annulment application?

The petition will include a recently issued baptismal certificate for the applicant, a copy of the divorce papers, and a marriage certificate from the marriage under review

13. If I am granted an annulment, will that mean the Church sees my children as illegitimate?

It is the understanding of the Church that children born of a union that is later declared an invalid marriage (annulled) are not illegitimate if at least one of the parties entered into the union with good faith.

14. I am marrying a person of another faith who is divorced. Does he (she) need an annulment?

15. I was married by a justice of the peace (or official of another faith tradition), do I need an annulment?

The Catholic Church requires that its members exchange their consent (vows) before a Catholic priest or deacon and two witnesses. Sometimes when a Catholic marries a member of another Christian tradition, an unbaptized member of another faith (for example a Jewish or Muslim person), or a person not affiliated with any religion, the Catholic person’s pastor requests a “dispensation from form” from the local bishop. This allows him or another priest or deacon to receive the couple’s vows in the name of the Catholic Church.

You should talk with a priest, deacon, or other pastoral minister at your local parish about the procedure and the appropriate paperwork that is required.

Read more: A Convalidation Ceremony in the Catholic Church

16. How do I begin the annulment process?

The person interested in obtaining a declaration of nullity should make an appointment with the priest, deacon, or other pastoral minister in their parish who coordinates marriage preparation. If you do not yet belong to a parish, contact the Diocesan Marriage Tribunal directly. In most instances, the parish minister will have the necessary forms for an annulment at hand and can explain the process and answer questions that arise as you get started.

About Together for Life Online Team

The Together for Life Online Team is a division of the Catholic publishing company, Ave Maria Press

Get monthly emails with inspirational marriage advice and enrichment ideas.